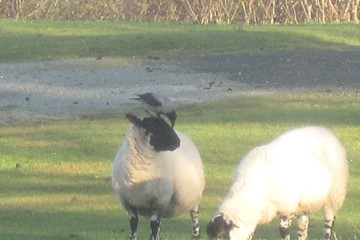 Mike Cullen has sent several photographs of a Hooded Crow seemingly 'grooming' a black-faced lamb's ears and face, presumably in search of ticks. This has occurred in the last few days at Kinloch Camp Site, Dunvegan. None of the images showed the animal to be in any distress and there is no evidence of pecking. 'Hoodies' have a somewhat unenviable reputation when it comes to their impacts on livestock, especially on lambs. Could this be an instance where they are actually doing some good? Has anyone else seen this kind of behaviour?

Andy Stables has added - " I see starlings doingit all the time around Milovaig and I've also seen jackdaws doing it too. The sheep being pecked always seem to be in very good health but I wonder if the birdsare taking blowfly larvae rather than ticks. Not much meat in a tick."