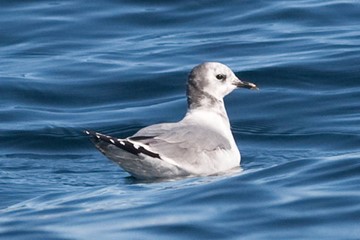 Sabine's Gull breeds on arctic tundra from the coast of Siberia to Alaska. It winters in the Atlantic off the south-west coast of Africa and is a regular but scarce passage migrant to Scotland. During the last few years Nick Davies of www.hebridean-whale-cruises.co.uk has found birds annually in August and September in the Minch from South Rona north to the Shiants. There are a number of banks here which provide tremendous feeding for seabirds. I had only previously handled a dead adult Sabine's which was found dead near Torrin in 2008. Nick has found a number of birds recently in Skye waters so I took the opportunity to-day to go out on Orca 1 from Gairloch. Unfortunately we failed to find a 'Sab' in Skye waters but did locate a first summer bird several miles north in the Minch off the 'Burma' bank - a great first for me. There were also about 50 Sooty Shearwaters, good number of Storm Petrels, and several Arctic Skuas. We only managed one Minke Whale and some Harbour Porpoise but yesterday Nick had a small pod of Killer Whales off Rubha Hunish. It is ironic that you have to go to Gairloch to explore the rich waters of north Skye, but with Nick's expertise, it is a trip well worth the effort. I still have to record Sabine's on Skye but thats for another day.