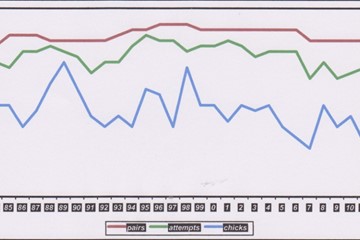 In 2011, after another cold winter similar to 2010, we again had a slight increase in nesting attempts. However, this year there was a slight fall in the number of hatched chicks. The very wet, cold and windy weather in May and early June seems to have been the cause of an unprecedented number of failures, leaving us with 10 fledged chicks only, from 10 nests, well below the long-term average for Skye. Of the five pairs which failed on chicks, these could all have been early season or just after hatching when the weather was very poor.