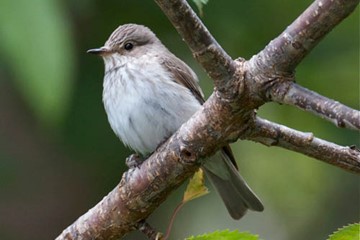 The BTO Atlas team has sent out an email thanking all volunteers for their help, and as local Atlas organiser I would like to add my own thanks to all local volunteers. We have managed to achieve our objective of covering at least 8 tetrads in each of our 10km squares, and this has included visits to islands such as Scalpay, Soay and South Rona. Hugh Insley and a 'hit squad' from the Highland Branch of the SOC managed to cover most of Raasay. During the 4 years of the survey, records of 202.7 million birds of 567 species have been submitted by some 17,000 volunteers. There were 178,463 timed tetrad visits and 3,838,935 roving records have been submitted. Our small band of volunteers on Skye have played an important part.

Some species are still breeding so these late records remain important - such as those of Spotted Flycatcher, seen in Martin Benson's image. House Martins are also still breeding so look for evidence of adults carrying food so we can continue to get confirmed breeding records into the system either through roving records or via myself.