Black Stork in Kyle of Lochalsh 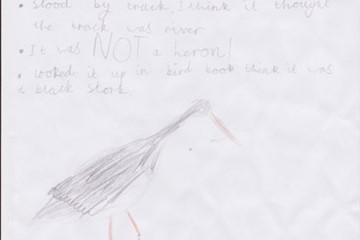 On 9th September 2010 pupils from Elgol Primary were at the swimming baths in Kyle when they spotted a strange bird feeding on the nearby football field. On returning home George Love-Jones checked his bird book and was convinced he had seen a Black Stork. This is an extremely rare bird in this part of the world and had never previously been recorded in Skye and Lochalsh. I was contacted by George's father and managed to get in touch with the school and spoke with staff and pupils. A number of pupils drew sketches of the bird and we sent the record away to the British Birds Rarities Committee. I have just heard from the Secretary of the committee that the record has been accepted - well done to everyone at the school in achieving this 'first' for Skye and Lochalsh. George's sketch is shown.