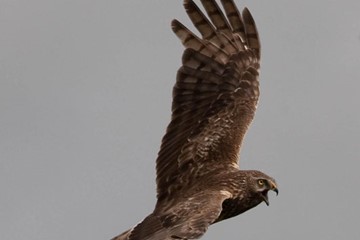 This has been the best year for breeding success for some years with 5 successful nests in the north Skye study area fledging at least 14 young. Four nests failed early in the season and again predation by foxes remains a problem with an adult female killed on a nest and the young chicks taken. At another site two chicks near fledging were killed by a fox but luckily one of the brood managed to survive. It appears to have been an exceptional year for voles and this may have contributed to the breeding success. Outwith the study area a pair bred in Strathaird for the first time in 10 years but unfortunately failed early. More promisingly a pair successfully fledged two young in Lochalsh. As far as can be established this is the first time breeding has been recorded in Lochalsh.