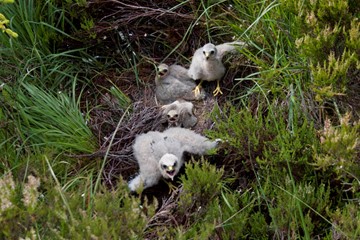 I've been involved in studying Hen Harriers on Skye for over 10 years now. The study is mainly in the north of the island but a bonus this year was that a pair returned to breed in Strathaird on JMT ground. Unfortunately this pair failed and weather may have been a problem. With superb settled weather in April birds bred earlier than normal. Unfortunately the weather through May was extremely wet and windy which may have accounted for some losses with four out of nine nests located failing. It appears that at least one nest fell to fox predation with a female killed on the nest. There are now cameras on three of the five remaining nests as part of a long-term study on predation by red foxes. A further update will be provided at the end of the season.