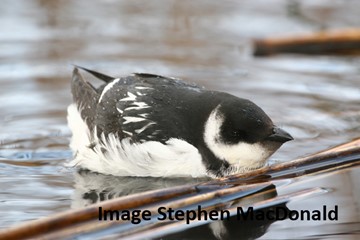 Little Auk is a regular winter visitor to Scotland usually after strong onshore winds when large numbers can be recorded off the east coast. The current winter has been exceptional with thousands of birds noted along the east coast and up into the Moray Firth. Much scarcer on the west coast we noted the first birds in the form of a casualty at Mallaig on December 21, and subsequent to that several were found on the west side of Skye. Since the start of the year birds were increasingly reported in the shallow and sheltered east coast lochs and this was probably associated with good numbers of small fish in places such as the Sound of Raasay associated with strong northerly winds. Guillemots and Razorbills were also present. Because of their tiny size, they are vulnerable in extreme conditions and also to predation, so it is not surprising that a number of dead Little Auks have been found. Within the last few days dead Guillemots have also been found so food sources may well be a challenge. More Little Auks have been recorded during this period than at any time since the website commenced.